The uneven distribution of insolation energy is the main factor that causes atmospheric circulation. Heat is transferred within the atmosphere and oceans, recognisable as wind patterns, ocean currents and pressure belts from low latitudes to high latitudes, redistributing  heat from surplus areas to deficit areas. At a global scale atmospheric circulation patterns are known as GLOBAL CIRCULATION MODELS.

Inter-tropical convergence zone
Also know as the Inter-tropical discontinuity. This is a belt of low pressures flanked by clouds and rain, it moves in correlation to the Sun’s movement.


Hadley Cell
This is a cell of atmospheric motion. The warm air rises at the equator, creating areas of low pressure. Reaching the Tropopause, heat is lost and the air moves pole-wards. The air sinks in the sub-tropics as it is colder and denser. The sinking air causes areas of high pressure on the surface. The air then returns towards the tropics to replace the rising air.


Polar cell
In the Polar Regions, cold dense air sinks and spreads towards the lower latitudes. Here, it warms and rises spreading out towards the Tropopause, moving pole-wards again to replace the sinking air.


Ferrel cell
In between the Polar and Hadley cell lies the Ferrel cell, driven by the movements of the neighboring cells.


The Tri-cellular model of 1856 is inaccurate due to the recognition of seasonal shifts of the sun’s position, energy transfers in mid-latitudes and most importantly the effect of Jet streams and Rossby waves, which disrupt north-south air movements in Ferrel cells.

The horizontal movement of air is controlled by: 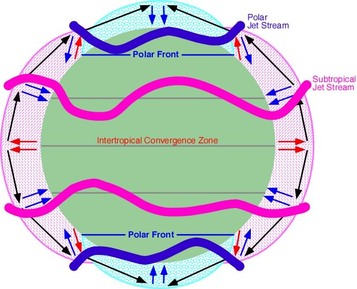 Upper-air, westerly winds are called the ROSSBY WAVES. Varying on season, there can be 2-5 waves. They are influenced by relief barriers, land and sea differences and can last for up to 6 weeks. These waves, in conjunction with jet streams, directly cause surface depressions and anticyclones. The wave form depends on: 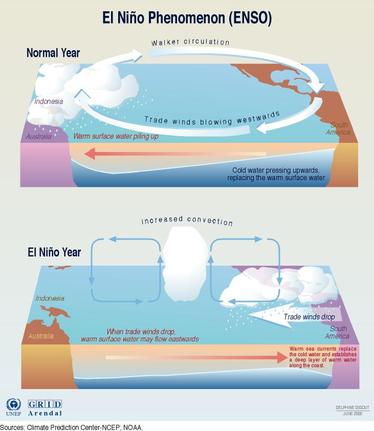 Occurring every 4-7 years, El Niño is a naturally occurring phenomenon. There is a shift in the temperature structure in the pacific ocean, resulting in warm water occurring in the eastern pacific off coastal Peru. This produces low pressures as air above the warm water rises weakening the trade wind circulation. This leads to high rainfall along the South American east coast and drier conditions in the western pacific over Australia and Indonesia.

Both phenomena can have global weather impacts. For example, strong El Niño events result in a weak Atlantic Hurricane season; La Nina events can cause drought in California.

A summary of Global Circulation